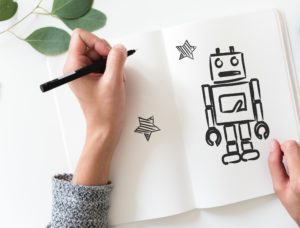 Molly the robotic seal has been used in care facilities as a form of therapy for dementia and memory care.

After a long day’s work, most employees need a good night’s rest to recharge, Molly only needs to be plugged in.
Molly, who will be joining the Patriots Landing staff in September of 2016, is an advanced interactive robotic baby harp seal developed by AIST, a leading Japanese industrial automation pioneer. She has been used in care facilities as a form of therapy for dementia and memory care residents and exemplifies the Patriot’s Landing’s dementia trained employees strides to stay on the cutting edge with dementia/memory care.

Molly the robotic seal has five kinds of sensors: tactical, light, audition, temperature and posture. She recognizes light and dark and can feel being stroked as well as the amount of pressure used to pet her. She understands when she’s being held and can recognize the direction of sound responding to both her name, greetings and praise. Molly imitates the voice of a real baby seal and expresses feelings through noises and body movement as well as facial expressions which allow her to react as if she has real emotions. She can change the way she responds and cries, learning the resident’s preferences and reacting with emotions such as surprise and happiness. She expresses feelings by closing and opening her eyes, following movement, and moving her head and flippers.
About the size of a cat and weighing exactly six pounds, Molly the robotic seal is easy to hold and pet.  She recharges simply by plugging in her electric pacifier.  A full charge is achieved in 3 hours and lasts for 5 hours of continuous use.

As a class two medical device in the U.S., she has been found to reduce the stress of both residents and their caregivers by stimulating increased interaction and socialization. Molly has also been shown to improve relaxation and motivation thus creating a positive psychological effect on residents and those she interacts with.

Molly’s manufacturer name is PARO.  PAROs have been used in Japan since 2003 and came to the U.S. in 2008. PAROs are covered with artificial fur similar that of a real baby harp seal.  The fur is antimicrobial while still being soft and inviting to the touch. Their body is also designed to be soft and comforting. PARO was designed with a diurnal rhythm to help determine its daily activity, making it more active during the day and less active at night. It also has sensors for sight, hearing, and touch as well as the ability to move autonomously.

We as humans are wired for connection. While the staff at Patriots Landing does not strive to replace that connection with robotics, we are excited to enhance it with the interactions of our newest staff member, Molly at Liberty Lane, our Memory Care Residence.